Once again, on Saturday 14th May 2022 the Caribbean birding community showed up and showed out for Global Big Day! Global Big Day is an annual celebration of the birds around you. Birders and bird lovers across the globe spend the day observing and recording essential data about the birds they see. Some also take this opportunity to visit new birding spots, reconnect with colleagues, and tick lifers off their lists.
continue read >>>

Posted by Julian at 01:24 No comments:
Email ThisBlogThis!Share to TwitterShare to FacebookShare to Pinterest
Labels: Global Big Day, news

There were three new birds in April, one was a mega-rare. There were Pectoral Sandpiper (Calidris melanotos), American Oystercatcher (Haematopus palliates), the mega-rare bird, and Willet (Tringa semipalmata), bringing the total birds species seen at the end of April to 87.

American Oystercatcher (Haematopus palliates) are large, stocky shorebird, about 17-21” (38-21cm) in length, with a long, bright reddish-orange beak, yellow iris, and a bright reddish-orange eye-ring.  The last confirmed sighting of one on the island was on August 30th, 1998. (BOS Series #24 - The Birds of Barbados (Buckley, Massiah, et al)). The bird was recorded at Inch Marlow, Christ Church on Friday,

Here are the rare birds seen during the month, highlighted below parish by parish. (* continuing Birds)

Feel free to contact me, Julian Moore @ 100birdsbarbados@gmail.com, John Webster @ barbadosbirds@gmail.com, or Ed Massiah @ ebmassiah@hotmail.com to report any rare bird sightings, or if you need assistance identifying a bird, we would be happy to help.

Posted by Julian at 18:06 No comments:
Email ThisBlogThis!Share to TwitterShare to FacebookShare to Pinterest
Labels: birding

May, A Thrilling Month For Birding


I've always looked forward to birding in the month of May.  It is not one of the birdies months of the year, in fact, it can be quite slow but here are just two reasons it is a month to look forward to, (1)the Global Big Day and (2)the Mega-rare possibilities. 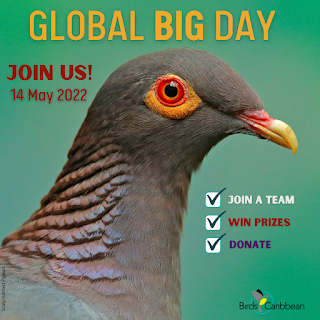 It is the biggest day of birding worldwide, The Global Big Day,  in celebration of World Migratory Bird Day, which will be on May 14th this year.  Last year more than 50,000 people from 175 countries submitted an astounding 120,000 checklists with eBird, setting a new world record for a single day of birding.  It was also the first time the island fielded a locally based birding team, The Bajan Birders. Our team along with fourteen others was able to raise valuable funds for a Caribbean bird conservation effort.  This year will be the same, and the funds raised will go towards providing travel scholarships to help deserving Caribbean students and wildlife professionalsrecorded 51 species touching all eleven parishes.  This was just 2 short of the highest Global Big Day count of 53species seen in 2017.  Can we see at least 54 species this year? And as a team, we have the ambitious goal of seeing the most species on the day. We need you to help us accomplish that, so join us by clicking here.

Another reason I look forward to the month of May is the high number of Mega-rare birds historically recorded during the month.

Here are a few examples:

These are just two of the reason why the month of May is a thrilling month For birding - let's hope this year lives up to the hype.

Stay safe and enjoy your birding

Posted by Julian at 12:10 No comments:
Email ThisBlogThis!Share to TwitterShare to FacebookShare to Pinterest
Labels: birding

Bird with Us for the Birds Caribbean Global Big Day fundraiser 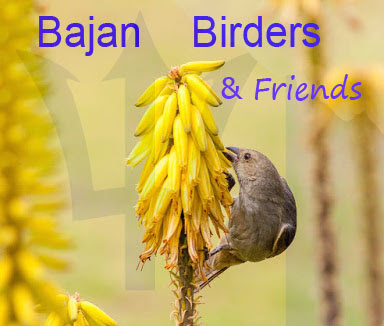 Global Big Day—the biggest birding day of the year, is just a few days away.  Again this year we are joining Birds Caribbean in its annual Global Big Day fundraiser.   This fun virtual team event pit together multi-national teams in a friendly competitive birding event in an effort to raise funds for a Caribbean Conservation, etc. This year's efforts will be geared towards raising funds to provide travel scholarships for Caribbean nationals to attend the AOS & BC Joint

Last year our small team The Bajan Birders, made up of birders from Barbados and one from St. Lucia, not only had fun but also assisted in raising funds and won a few awards. 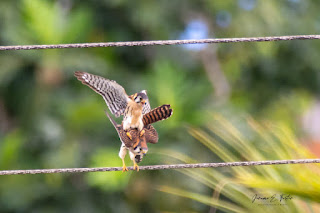 Teammate Jerome Foster, of St. Lucia, who was only able to bird a few hours in the morning won the Life in the Wild category with “American Kestrels Mating” 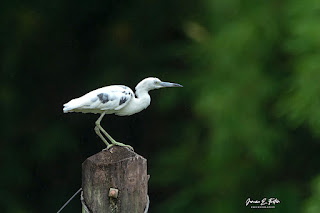 and third in Best Bird Photo with an Immature Little Blue Heron. 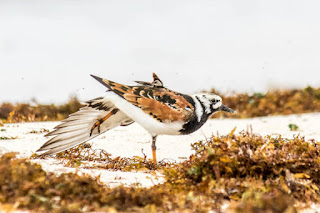 Yours truly was awarded the Best Shorebird with an image of a Ruddy Turnstone in breeding plumage.

This year we want to double all of those numbers, have a greater international presence and raise funds of well over $100.
To emphasize our goal, the team was renamed “Bajan Birders & Friends”, and invitations to join our team were extended to birders across the globe.
You can join the effort by joining our team.
To do that:
If you want to donate:
Click on the ‘Donate’ button. Make a donation (however small, everything helps) to any of the teams or team members or simply donate to the entire campaign.

Come bird with us, donate and have lots of fun. Stay safe and enjoy your birding.

Posted by Julian at 00:23 No comments:
Email ThisBlogThis!Share to TwitterShare to FacebookShare to Pinterest
Labels: birding

Mark Your Calendars and Join Us for Global Big Day on May 14! 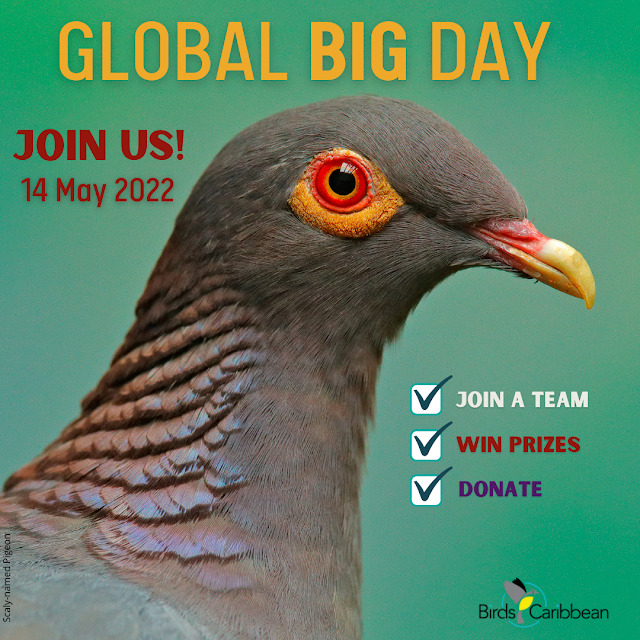 It’s that time of year again! We’ll be hosting our annual celebration of Global Big Day—the biggest birding day of the year—on Saturday, May 14, 2022. This time, we are raising funds for travel scholarships to help Caribbean students and wildlife professionals attend the AOS-BC Conference in Puerto Rico this June*.

We are bringing back our popular teams competition from 2021, and celebrating together the energy, excitement, and camaraderie that’s associated with Global Big Day.

Last year was a resounding success, with people from 192 countries reporting 7,234 species in a single day—the biggest Global Big Day turnout ever! For BirdsCaribbean, our numbers were also impressive—15 teams with members from 36 countries reported a total of 1,348 species and raised over $20,000, and we had so much fun doing this. Let’s make this year even better! Continue reading >>>

BirdsCaribbean is a vibrant international network of members and partners committed to conserving Caribbean birds and their habitats in the insular Caribbean (including Bermuda, the Bahamas and all islands within the Caribbean basin).

Posted by Julian at 22:18 No comments:
Email ThisBlogThis!Share to TwitterShare to FacebookShare to Pinterest
Labels: news

It is spring migration season, and even though the island doesn’t see nearly as much avian traffic as in the fall, we still see clear signs of it taking place.  For example, some of the bird species that wintered here, e.g. Lesser Scaup (Aythyahave already molted into breeding plumage, in preparation for migration.  (E.g. Blue-winged Teals - Spatula discors).
Another sign of spring migration is birds making pit stops on the island en route to breeding grounds.  I got a first-hand look at what this could look like when I visited the beach at Inch Marlow, Christ Church on the weekend.   There I counted over 260 individual shorebirds made up of 6 species. The most abundant were Ruddy Turnstones (Arenaria interpres), over 140 of them in various stages of molting to the bright orange-brown breeding plumage. These were busy searching the Sargassum Seaweed for food.  This contrasted with the layback resting mood of the Sanderlings (Calidris alba) who were mostly just loafing around enjoying the sun, sea, and sand.  A few of these birds also showed early signs of breeding plumage.  A few Semipalmated Sandpipers (Calidris pusilla), Least Sandpipers (Calidris minutilla), and Semipalmated Plovers (Charadrius semipalmatus) were sprinkled among the flock. As we enter the latter half of the month of April into early May, another group of birds, ones not as visible as the shorebird group will pass through.  We are talking about songbirds in the family of Wood warblers, Tanager, etc.  Be on the lookout for these beauties as you are out and about.

Stay Safe and enjoy your birding.

Posted by Julian at 21:51 No comments:
Email ThisBlogThis!Share to TwitterShare to FacebookShare to Pinterest
Labels: birding

Visiting birders dominated during the month of March.  Over twenty of them submitted over 120 of the 188 checklists that were submitted to ebird.org during the month.  I do hope the Ministry of Tourism is taking note.   Together with our local birders added three new birds, Laughing Gull (Leucophaeus atricilla) Leach's Storm-Petrel (Hydrobates leucorhous), and Western Sandpiper (Calidris mauri), to the island’s year checklist, ending the month with 81 species.

The sighting of the Leach's Storm-Petrel highlighted an area of the local avian fauna that is least explored, that of the birds that inhabit the seas around our island, pelagic birds.  These are birds that spend most of their life at sea only returning to, or close to land for nesting or during bad weather.  Storm-Petrels are some of the smallest birds in that group. For example, Leach's Storm-Petrels are between 5 – 7” in length (12-17cm), which is about the size of a Common Ground-Dove (Columbina passerina).  So if any of you readers have a boat, we would not mind tagging along with you every now and then, all in the name of science.

Very few new rare birds entered the list during March., and after this would be the last time the American Coot white-shielded (Fulica Americana) will be listed as a rare bird, as was done by ebird.  This bird continues to nest successfully at a few locations across the island. The red shielded variety, which is the rarer of the two will continue to be listed.
parish. (* continuing Birds)

Feel free to contact me, Julian Moore @ 100birdsbarbados@gmail.com, John Webster @ barbadosbirds@gmail.com, or Ed Massiah @ ebmassiah@hotmail.com to report any rare bird sightings, or if you need assistance identifying a bird, we would be happy to help.

Posted by Julian at 05:19 No comments:
Email ThisBlogThis!Share to TwitterShare to FacebookShare to Pinterest
Labels: birding
Older Posts Home
Subscribe to: Posts (Atom) 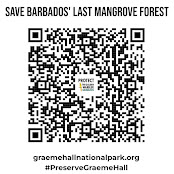 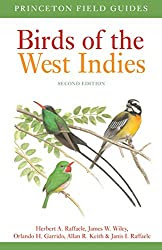 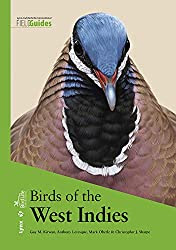 Birds of the West Indies
Tweets by Birds_Barbados